So, the forecast was great for Saturday but not so good for Sunday but you can never tell until the day I suppose.  We were still really excited for the weekend packed full of racing at 3 Sisters for the PDMCC Club. 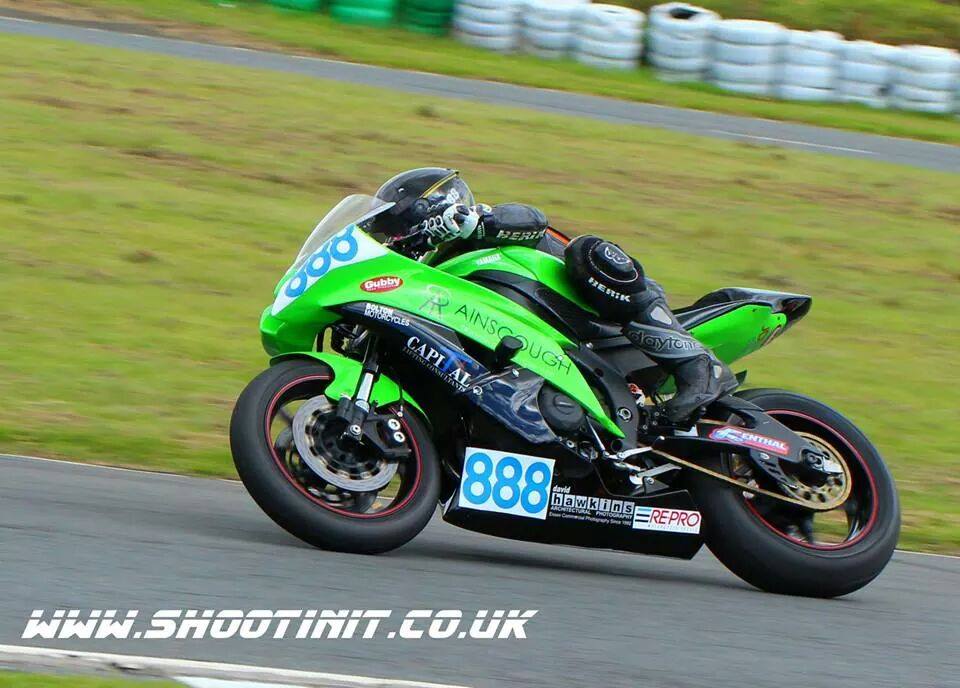 Again I was on the new bike (we have now sold the old one to fund racing), and competing in the Newcomers Championship and the Formula 600 Championship.

Before the racing I was tied for 1st place in the Championship in the Newcomers with a good friend Martin McGrath….we needed to keep Martin behind us!!!!

The weather was awesome and I had gone for a harder compound tyre to see if they would grip and last better in the hotter temperatures.

From practice in the morning the track was that hot, the grip levels were down and the bike was sliding around a lot!…This was going to be interesting!

I drew grid position 2!!!!  Finally a grid position that went my way, but of course Martin drew pole out of the bag, but I knew I had the pace and all I wanted to do was be at least on the front row.

I got a terrible start, the bike wheelied from left to right, but I managed somehow to stay in second position behind McGrath.  Straight away McGrath was on a good sub 1minute lap pace, but I was hot on his heels and lapping comfortably.  On the 4th lap I decided to get past to see if I could pull away.  Again the grip was low and as soon as I got into 1st, I lost the back end coming out of the long right hander, but managed to hold on and eventually pulled away to win and get pole position by 2.7 seconds ahead of McGrath!  Result!

After the win in the Newcomers race I was looking forward to being pushed by the big lads in this race!  Its awesome learning from the national level riders and especially when you are beating them!

I got grid position 7 for the qualifier – I got a great start compared to the Newcomers bad one and found myself in 5th position behind the leading pack.  The leader Rob Barber who got a 3rd place at this years Isle of Man TT Races disappeared with a fastest lap of 55 seconds, I was never going to catch him so I focused on 4th place.  I dug deep and managed to pull myself onto his back wheel but unfortunately the laps ran out and I crossed the line in 5th position only 0.3 seconds from 4th place.  Again these racers are national and international level riders and for me to be even in the top 8 is a massive achievement.  I was over the moon.  Loved the race with these lads.

However, the harder tyre was not working as I had hoped, I didn’t have the time to change tyres so I made sure I had a softer one for Sundays racing!

This was the big one for the day, points race and my goal was to win but if not possible, I needed to keep McGrath behind me to build a lead in the championship.

I got a mega start and got into the lead.  I put my head down and dug deep.  It was an uneventful race to be honest, I lead from start to finish and won the race by nearly a second from James Dickinson who was on good pace, McGrath finished 3rd which meant I finally took the lead in the championship!  Again though grip was down and I was not on pace like the last round, I managed a 58.4 second fastest lap compared to the 57.7 seconds in the last meeting.  But still points mean prizes!!

The Formula 600 race took place 5 minutes after my newcomers race and unfortunately I missed the start of the warm up lap which meant I had to start from 15th on the grid as supposed to 5th!!  I wasn’t happy but still I love racing with these lads.

I got a great start from the back of the grid and managed to get into 8th place.  I had pace on the 2 riders in front so quickly made a dash for 7th and the following lap I made my move on 6th place where I managed to get onto the back wheel of 5th place Dimelow but I ran out of laps and finished in 6th.  I was over the moon with this race, I was confident I was on the pace to get 4th and was hoping for a 3rd by the end of the weekend.

The weather was iffy today, it rained all night but we was promised for good weather.  Luckily the track dried out by this race and full dries were on the cards, and I had my softer tyre on which gave much better feedback than the harder one yesterday!!

I got another great start, and was immediately into 1st position into the second corner! Again another race which I managed to hold onto the lead from start to finish so I was on pole positon for the championship race in the afternoon :-D.  Grip levels were a little iffy due to the damp conditions but the softer tyre worked much better and the bike felt good for the upcoming races! I won the race by 0.8 seconds from a flying Adam Gittings in second and Mike Norbury in 3rd!

Again I was loo0king forward to racing the big boys again, and was hoping for a good grid position, I drew 9th which wasn’t too bad.

I got a great start and got into 8th position, I had pace on the 2 riders in front so quickly made a dash for 7th and the following lap I made my move on 6th place.  It was a move I like to make at 3 sisters, late on the brakes into the hairpin J.  Unfortunately going up to the mountain run I missed my braking point and I lost 6th place, but i got straight back on his back wheel and then remembered a new line Rob Barber had showed me into paddock bend….I got a good run onto the straight and got late on the brakes…a little too late to be honest and ended up block passing into 6th again, the back wheel was sideways on (I was told by spectators that it looked awesome from the sidelines).

Once back into 6th I pulled straight onto the back wheel of McGrath and the 4th place rider but unfortunately again the laps ran out.  Still an amazing race and 6th position was a fantastic

Again this was the big one for the day, points race and my goal was to get another win to extend my lead in the championship.

I got an awesome start, keeping my lead and again  I put my head down and dug deep.  I was leading when 2 accidents happened which meant that yellow flags were out around the long right hander, Lunar and the hairpin.  With 3 laps to go I was entering Lunar when we caught a backmarker under the yellow flags.  Under a yellow flag, you are not allowed to pass anyone, so I had to roll off the power until the green flag at the mountain climb.

To my surprise, McGrath came flying past under the yellow flags, and by the time I got to the green flag he was about 3 seconds ahead of me and Gittings.  I managed to get back on his tail, doing so I had a near highside accident exiting Paddock bend but luckily held on.  We crossed the line in 2nd just behind McGrath but after a Mashalls enquiry, McGrath was given a 10 second time penalty which meant he was demoted to 3rd and Gittings was 2nd and I got 1st.  Extending my Championship lead to 10 points.

Unfortunately I had to sit this one out, the last 7 races had taken its toll on my front tyre and I didn’t have time to change the tyres before the race.

Overall an awesome weekend, 4 out of 4 wins for the Newcomers and leading the championship by 10 points with 3 rounds to go, and  in the top 6 for the Formula 600 races!  Things are going much better than expected this year and we are now talking about competing nationally next year with HOTTRAX Championship, that is if we get enough funding together!

Again this wouldn’t be possible without the help of the ATSL family and my other sponsors, family and friends!  We really appreciate your support and I’m so glad we are able to repay you with good results!!

The Next outing is at Mallory Park on the 10th August in Leicester and the next 3 Sisters meeting is on 14th September.