It was another double header to end the season and to mix things up a bit, PDMCC decided to change the track layout which meant another new track to learn at a critical time in the season.

I went into the final rounds with a 12 point lead in the Newcomers Championship ahead of Martin McGrath in 2nd. 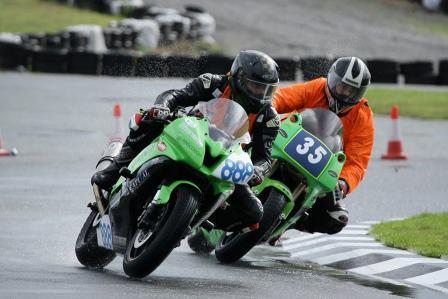 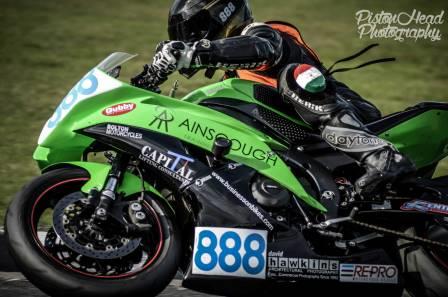 Saturday was very wet, with constant rain falling throughout the morning.  The Newcomers were the first qualifying race to go out and I pulled position 5 on the grid.  I got off to a good start and got into 3rd position by the second corner behind McGrath and another newcomer.  At the new section of the track, on the slippery left hander the newcomer in 2nd place fell and then Mike Norbury got past me, seeing me in 3rd place.  I just settled down and made sure I stayed rubber side down.  The following lap, McGrath fell on the slippery left hander which meant that I was promoted to 2nd and that McGrath would have to start on the back of the grid for the first championship race.  I then knew I had to stay aboard the bike and when I saw Dan Tomlinson coming up beside me, I just decided to let him through and I brought her home in 3rd for a front row start.  This was a brilliant start to the weekend and I was very happy with that race.

Unfortunately the Newcomer who fell in the early stages of that race was given the all clear by the scrutineers but they failed to notice a hole in his generator cover and when he went out in his second race, he dumped oil all over the track, resulting in cancelling the meeting due to safety reasons.

It was then agreed by the club that the 2 races on Sunday were to be championship races…but the qualifying from Saturday would not stand and that the grid for the 1st race will be determined by Championship positions which boosted McGrath to 2nd position instead of the back of the grid,  next to me on pole.  This was a bit of a worry as I knew that I would have to go all out in the 1st race to keep McGrath behind me.

Luckily Sunday morning was dry and practice went very well, the bike felt good and I was looking forward to the races.  Off pole I got a great start and lead all the way round to the new section and that horrible left hander, when…I turned in too early and caught the concrete on the inside of the corner which took my front wheel away from me and I had fell out of the race.  Luckily I wasn’t hurt and the bike was hardly damaged at all, however McGrath finished 2nd, resulting in us being equal on points but the catch was, due to me falling I wasn’t so lucky to be promoted to the front as Mcgrath was and I had to start at the back of the grid in 15th with McGrath in 2nd.  I was furious with myself, the only mistake I make all season and it was in a Championship race at the end of the season.

From 15th on the grid, the only way to win the championship was to beat McGrath.  I knew it was going to be a tough race but it wasn’t over yet.  I got a great start and by the second corner I was in 7th position.  I rode my heart out making my way up to 5th position but it wasn’t enough.  McGrath finished 2nd which meant he won the Championship.  On the plus side, my 5th secured me 2nd position in the championship, just 1 point ahead of a flying Mike Norbury who was riding Rob Barbers CBR600 from the middle of the season.

I would like to thank everyone at ATSL for their support and help this year. It has made a dream come true for me and I am glad to have brought home some silverware to repay the generosity.  The whole team appreciate everything that has been done to see us through a successful first year and we look forward to working with you all next year.

Our plans for 2015 are to go to the top level of Club Racing and race the Thundersport Pre-National Championships.  This is a national club that races at major national circuits throughout the UK.  These plans aren’t in stone as this level of racing requires big funds.  My job from now up to next year is to find as much sponsorship as possible and Ruth is already on the case, designing flyers and I will be visiting local companies and hopefully raising funds for the year.

Thanks again everyone!! I will be collecting my 2nd place trophy mid-November and would love it if I could get a photo of us all with the bike and the trophies, including you Brendan!!!

Let’s look forward to a great year in 2015 and some awesome racing, from me and the JDL Racing Team!